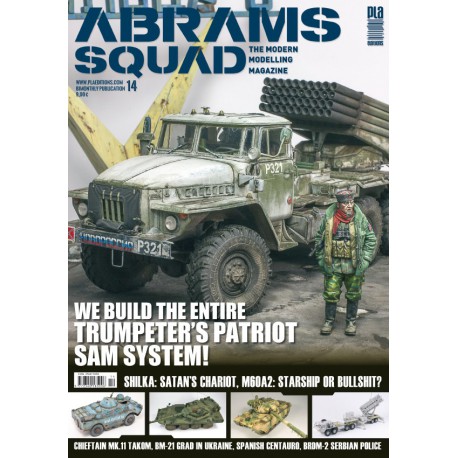 10 – Remote Thermal Sight:  If in the previous issue, the Squad dared to produce two models, in this issue we throw caution to the wind and go for nothing less than three kits! We have built the entire Patriot SAM Sytem, composed of tractor, launching station and radar as Trumpeter has released this combination in two separate boxings.

22 – An Armoured British Gentleman: Chieftain Mk.11: Simon Antelmi joins the already big Squad with a new release, the Takom’s Chieftain. An excellent model and our Italian friend knew how to take advantage of it, painting it with an attractive and expertly painted scheme.

32 – When black clouds bring explosive hail: BM-21 Grad: From Belarus our friend Ignat Pomazkov arrives with an amazing model of a BM-21 Grad. We don’t often repeat our subjects, but in this case we can make an exception. None of our readers will remain indifferent when seeing the model finished by Ignat, because it’s a master combination of building, detailing, painting and scenery.

42 – Shilka: Satan’s Chariot: We can’t deny the ZSU-23-4 is now in fashion. Soon we shall find three different kit options on the market of this lethal vehicle in 1/35. We tell the history concisely and which options we’ll have… to allow you to start thinking of how you will do your Shilka!.

46 –  The iron horse of the Spanish Cavalry: VRC-105 Centauro: The VCR-105 Centauro in all its variants is probably one of the most popular model kits in the Trumpeter catalogue.  Óscar Alfonso delights us with his great detail and paint work of the Spanish version of this well known Italian AFV.

58 - BRDM-2 Serbian Police: A Second article in Abrams Squad for one of the most valued modellers in the European panorama: Andrey Grechkin. This time, our muscovite friend offers us an extremely colourful vehicle of the Serbian Police with a detailed build and a bold paint job.

68 - M60A2: Starship or Bullshit?: Sometimes certain subjects become in fashion because one or various producers releases a product about them. In this case, the M60A2 shall be in the catalogue of no less than four different producers. Nacho Inigo relates us briefly what was the history of this mythical weapon of the Cold War.

72 Pages - ALL TEXTS IN ENGLISH